There are many methods of soil tillage but the two major groups are:

Non-inversion tillage characteristics include maintenance of soil structure including any compaction, reduction of erosion and nutrient losses and fewer nutrient losses at the time of cultivation. Non-inversion tillage can be to varying depths, typically in the 5 to 10cm range, and requires less labour and power than ploughing. Zero or conservation tillage cuts a slot with either a disk or tine thereby causing very little cultivation. Strip tillage is minimum tillage in strips between undisturbed soil.

There are consequences for crop agronomy and crop protection of these tillage approaches. Soil temperatures, water and nutrient availability are all affected, as is the microbial environment in which the crop and its pest, pathogens and beneficial organisms exist. Furthermore, the timeliness of farming operations is affected through differences in land access and labour requirements.

We have investigated many of these factors in our experimentation on the Mid Pilmore barley soil cultivation platform on Mylnefield farm at Hutton now terminated. However, a new tillage platform in Grieve’s House field on Hutton’s Balruddery Farm has been established comparing plough and harrow cultivation with direct drilling. Both cultivation treatments have fully-replicated 4-year winter crop-based and spring crop-based rotations in which all crops are present every year and is in its 3rd harvest season (2020).

Some diseases are affected by cultivation, through effects on burial of inoculum, crop debris and build-up of antagonistic microbes and we are investigating some of these processes. Diseases caused by biotrophic pathogens such as the rusts and powdery mildews can be reduced in direct drilled crops likely due to more effective induced resistance from microbial sources such as mycorrhizae. Prevalence of pests is affected too, slugs in particular. However, the cropping cycle and in particular use of cover crops can be used to attenuate such issues.

Cultivation changes the structure of soil, changing the balance between the number of and size of soil clumps/clod in a specific volume and the number of and size of the gaps or pores between and within the clumps/ clods.  Inversion plough systems have large effects on the structure of soil, including bringing lower layers off soil to the surface, in contrast to minimum tillage, strip tillage and direct drill systems, which only minimally disturb the soil, allowing biological processes to take a more dominant role in creating soil structure.  The number of times heavy farm machinery passes across a field also affect soils structure with compaction (dense soil) resulting especially when machinery is used in wet conditions.  Soil structure is dynamic over the management season and is also influenced by weather conditions, with freeze thaw, and rain cycles breaking soil clumps and clods down to smaller sizes. 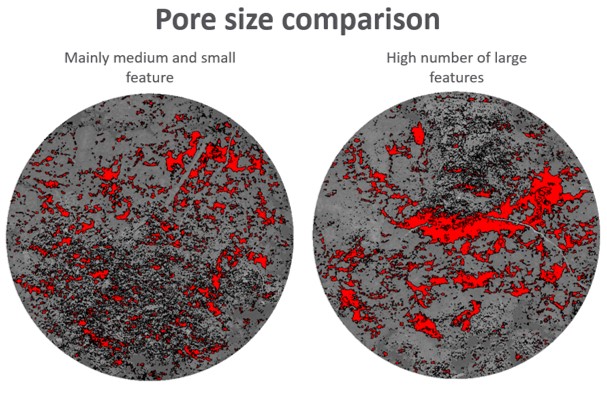 Root growth is important to allow crop plants to establish and continue to supply the plant with nutrients and water from the soil.  The rate at which roots can grow in soil is affected by how hard the soil is and how much oxygen is available to the roots.  Both of these are affected by how much water is in the soil.  As soil dries it can get harder making it more difficult for roots to grow through.  Alternatively, if soil becomes very wet (waterlogging), roots cannot get enough oxygen to allow them to grow.  Along with the underlying soil properties, the number and size of small holes (or pores) in the soil affects how water behaves in soil and how likely a soil is to become hard on drying and waterlogged after rain.  Roots also use the pore network to grow through when pores of the correct size are available, mitigating against the effects of hard soil.  Different cultivation techniques change the number and size of different pores in a soil, affecting the rate at which plants can establish a good root system. 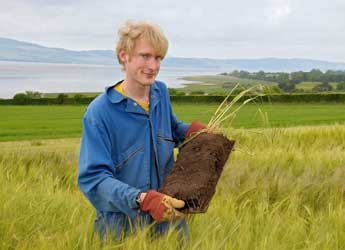 Data generated on soil chemistry in a range of long-term cultivation treatments suggest that non-inversion tillage is beneficial in promoting the availability of key nutrients such as phosphate and nitrate in the surface of the soils where most of the roots and biological activity of the crop will be. It is also clear that the lack of disturbance of the soil leads to concentration of acidification in the surface of the profile which may render this zone more hostile to plant growth and microbial activity in the long-term.