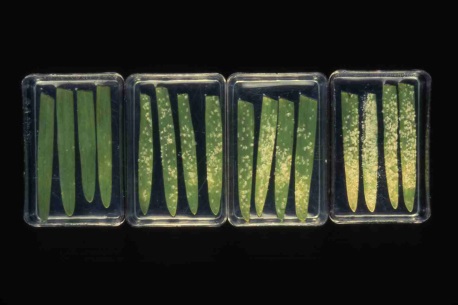 Resistance elicitors mimic the potential attack of a pest, parasite or pathogen on a plant thereby inducing a defence response. High level induction of defence responses can be costly to the plant resulting in deleterious effects, i.e. lost yield or quality. However, priming the defence response mechanisms so that they respond much faster to subsequent challenge by a real pathogen or pest is less costly and can enhance resistance considerably when needed.

Their efficacy can be very variable and apparently inconsistent. To combat this, products with different modes of action could be combined but with care as there is cross-talk between defence molecular pathways that may result in responses from synergistic to deleterious. Their efficacy can be affected considerably by the host plant species and variety. Furthermore, elicitors have differential efficacy against pathogens with different modes of pathogenicity, particularly between the biotrophy / parasitism and the necrotrophy ends of the spectrum. However, against some diseases (e.g. light leaf spot on brassica crops) they can be more effective than any fungicides available.

Used in IPM programmes with conventional pesticides they can be a very useful tool to reduce use of less desirable active ingredients and provide a more robust programme overall. They are less likely to affect non-target organisms and have reduced risk and hazard.

Resistance elicitors are a tool in the Cereals IPM Toolbox.